The history of fire is a long and winding road with a distant and blurry beginning. Control of fire helped early upright apes become human, but it was a long process. Human fascination and fear of fire predate our first hominid ancestor. So why is fire such a big part of so many different kinds of worship? Imagine if you will, the savannah…

On a starless night at the end of the dry season, when the watering hole is a glorified mud puddle full of hippopotami and crocodiles, we hear a distant display. The beast who displays must be enormous and powerful so we cower in fear. High in the trees that edge the grasslands, we make nests of branches and leaves in order to sleep like our ancestors. As our tribe settles in, the night is broken with flashes of day and the angry, yelling being comes closer.

Simultaneously, the night is broken with a vicious clap and our tree catches fire. Scrambling, we jump from limb to limb, descending in fear. Our extended family abandonds their nests and now we are all exposed to the predators of the night. Exposed in the grassland, visible in the firelight, our refuge burns. We flee into the darkness, away from the anger, away from our refuge and into danger.

Thus, the fear of fire was born and today it remains alive and well. This kind of scenario plays out every year in dry climates. Of course, our tree houses have advanced to mansions, but many of our human tribe-mates still suffer as they watch their refuge burn no matter what corner of the globe they live in. Fast-forward through evolutionary time, to our ground-dwelling ancestors who no longer fear the grassland…

The watering hole is cracked dry earth but the sound accompanying the lights in the sky promises to deliver water. We know the lights without display does not guarantee water, but this night the sky-being is loud and we are loud in return. We make our camp away from the watering hole and scream back at the sky-being. We ask for water and keep watch lest the long tooth cats take our children.

Finally, the sky opens and we are drinking the water as it falls! A vicious clap of thunder and the nearby tree catches fire. We rush toward the tree, knowing its circle of light protects us from the long tooth cats and the light keeps us warm from the water that falls.

So, here is a speculative demonstration of the beginning of the hominid love affair with fire. At some point on the evolutionary timeline, the early human-like apes switched from abject fear to awe and eventual appreciation of fire. No one knows when the change took place, or what motivated it. Theories abound, however, archaeologists do know that the change had to predate the hominid use of fire. No one can effectively use a tool they are afraid of, whether the tool is fire or witchcraft or a chainsaw – fear reduces a person’s ability to work (Towey). 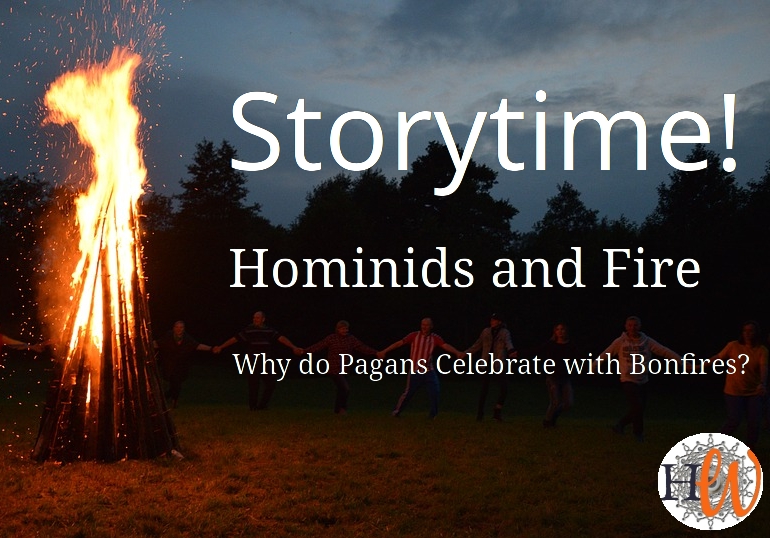 The earliest known examples of hominids using fire resulted in baked clay made between 2.0 to 0.5 a million years ago. This controlled fire was not a campfire or a hearth fire, but a tool-making fire in an open space (James). Since that discovery, more examples of fire-as-a-tool have been discovered in the same region, indicating the use of fire was widespread. Fast forward through evolutionary time again, to the numerous and generational migrations out of northern Africa into the wider world. Those migrations took generations. Although we have no specific histories we know that tribal warfare, population growth, and resource depletion can prompt migration…

We walk every day, from sunrise to sunset. We were once a large family but now we leave them and seek a better way. As we left, grandmother gave us the fire in secret, when she buried the clay. We must tend to the fire and care for it like a child. Tomorrow, when sun falls away on our left we will make our own camp and start our own tool fire from grandmother’s fire seed.

Generation after generation of hominids moved north, eventually out of Africa. Different migration paths are visible in the archeologic record and each of the paths utilizes fire. It is easier to carry an ember than it is to create a new fire, then and now, so it likely that each fire was carried into each new camp. By this time in history, fire is an invaluable resource. It would be guarded and fire-related skills would be taught to the younger generation by the older generations. Fast forward in evolutionary time to the modern human, after the Earth is covered in human footprints. Prehistory reigns and the trail of fire is still blurry. Nomadic agriculture exists but towns and cities do not. Instead, herding and agriculturally timed festivals bring people and trade together…

Light from the fire danced on his skin. He is from another tribe and his father is a herder. My father speaks to his father and I will go tomorrow, away with him for a year and a day. If he is honorable and his sisters are kind we will join together before both tribes in the heat of next year’s herd-move-and-seed-plant fire.

And so the awe-some and powerful sky-god delivered fire to the hominids. When they were ready, they took fire as a tool and became human. Pagans celebrate the fire of humanity in many different ways, one of which is the bonfire. Other faiths do too, what do you think all the candles are about?

Let's talk about it. Cancel reply

This site uses Akismet to reduce spam. Learn how your comment data is processed.

“Knowledge is not a series of self consistent theories that converges towards an ideal view; it is rather an ever increasing ocean of mutually incompatible (and perhaps even incommensurable) alternatives, each single theory, each fairy tale, each myth” Paul Feyerabend

Almost half way to spring!February 3rd, 2020
Feel the stirring of spring tonight! Celebrate the returning light!